I believe the best way to understand production possibilities frontier, unit labor requirements and relative prices is with an example.

Home has 1,200 units of labor available. It can produce two goods apples and bananas. The unit labor requirement in apple production is 3, while in banana production it is 2.

The idea here is very simple. The economy consists of only workers and there are only two goods. We wish to look at what the price of goods will be, how much labor will be paid and so on.

The first important thing to cover is what are the assumptions of this model.

The production possibilities frontier shows the combination of goods that an economy can produce.

First step: let's work out how much the economy can produce when they produce only one good.

i) if the economy only produces apples

The economy has 1,200 units of labor (you can think of this as having 1,200 workers for simplicity) and it takes 3 units to produce one good (so it would take 3 people to produce one apple.. this is not a very good economy)

ii) if the economy only produces bananas

The unit labor requirement is 2 so in this case they will be able to produce 1,200/2 so the economy will produce 600 bananas

With this information we can produce the production possibilities frontier. 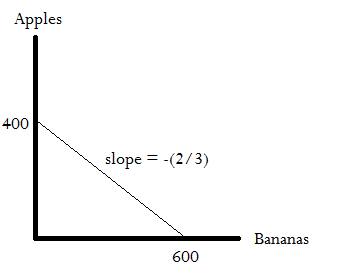 From this we can see that the maximum apples we can produce is 400 and the maximum Bananas are 600. The slope is -(2/3) which shows the opportunity cost of production. It says that if we wish to produce another banana we need to give up 2/3 units of an apple.

In the absence of trade what would the price be? why?

Remember that we assumed that i) people can move freely between producing apples and oranges and ii) people only care how much profit they earn.

This means the following identity most hold:

with some re-arrangements we get

This leads to an important result: The relative price equals the inverse of the slope when you drop the negative sign