The demand curve describes the relationship between price and quantity. It states how much of a good a consumer is willing to purchase for a given price.

The demand curve is a negative relationship, which means that as the price of a good increases, the quantity demanded decreases - thus, the demand curve slopes downwards.

Superficially, the demand curve is a negative relationship because people desire to purchase more of a good the cheaper it becomes.

The reason why the demand curve is downward sloping is because of the following two reasons:

In economic terms, we say that there are two reasons for why the demand curve is downward sloping (1) the income effect and (2) the substitution effect.  What does this mean though?

The best way to capture how the income effect works is to imagine that you live in a one-good world.

Imagine you have $10 income which you are going to spend all of this on the one good (remember, we assume that consumers spend all income) - let's assume that this good is donuts. 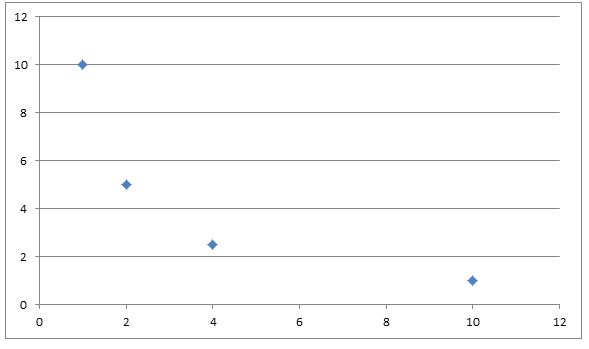 If you were to connect the dots you would see that the curve you have drawn is downward sloping.

This diagram should also explain why do we call it a demand curve when it is drawn as a linear (straight) line.  Demand curves are typically curved, however, for simplicity we draw them as a straight line.

To have  a substitution effect, we can no longer assume that we live in a world where we only consume donuts. We must introduce another good. Thus, let's imagine that there is now another good: Beer - oh what a glorious place this would be to live!

The substitution effect states that as the price of one good gets cheaper we will substitute away from the more expensive good towards the cheaper good.

It is assumed that the more you consume of something, the less "happy" you will get from consuming more units - economist call this diminishing marginal returns.

Now suppose that the price of a donut is 50 cents so you are deciding between 2 donuts and one beer. Since you are now giving up 2 donuts for  a beer, which makes the decision more difficult.

If the price dropped to 25 cents a donut, you would be sacrificing 4 donuts for a beer. Unless you really liked beer you would probably get the 4 donuts - and this is the substitution effect.

As the price of a donuts decrease, you need to give up more donuts to purchase a beer. Therefore, the cheaper the donuts become, the more likely you are to drink less beer and buy more donuts. And this summarises the relationship. As the price decreases, the quantity increases as you are more likely to buy donuts instead of beer. There is the negative relationship and this explains why the curve is downward sloping.

So in summary, because your income seems bigger and other goods seem more expensive, the demand curve slopes downwards.

Finally, we tend to make some assumptions for the demand curve.

1 thought on “Why does the demand curve slope downwards”