This is probably the question which is answered wrong most frequently by students when completing homework based on consumer and producer surplus. There are a few mistakes which are made which I will go over in this post. 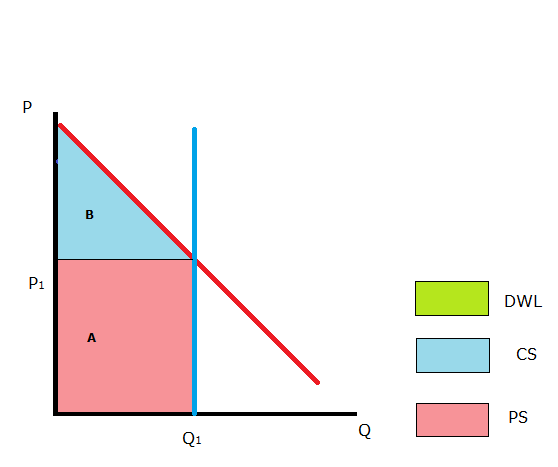 The first mistake is labeling the producer surplus incorrectly.

The consumer and producer surplus are labelled above. The area "B" is the consumer surplus and there is nothing surprising about this. Most students get this part corect.

The supply-and-demand diagram can be re-drawn to make it clearer to students. It also gives a better understanding of the nature of a good which has perfectly inelastic supply. 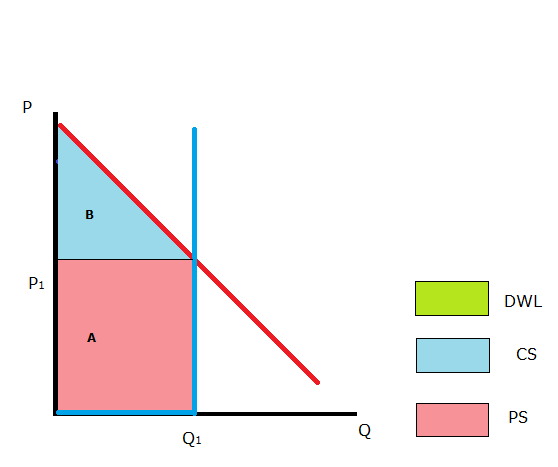 This is because a perfectly inelastic supply curve means the cost of producing a quantity of goods less than Q1 has no cost.

An example may be tickets to a sporting event. If the stadium isn't full, the cost of having another person in the stadium is essentially zero. Therefore, the supply curve is zero up until we reach the maximum capacity. And since it is practically impossible to add extra seats to a venue, you cannot supply a good past the point Q1.

Returning to the original problem. We first need to recall that the producer surplus is defined as the difference between the price paid and the price at which producers would have sold the good.

Up until the point Q1, producers would be willing to see the good for nothing, so the producer surplus is the entire square, which is shaded red in the above diagram.

Hopefully the addition of the supply curve at 0 clears up that problem.

The second problem encountered is the dead weight loss when supply is perfectly inelastic.

When the supply curve is perfectly inelastic, there is no dead weight loss when the government intervenes in the market-place. Dead weight loss can only occur when the quantity of goods is be produced and consumed decreases because of the intervention. 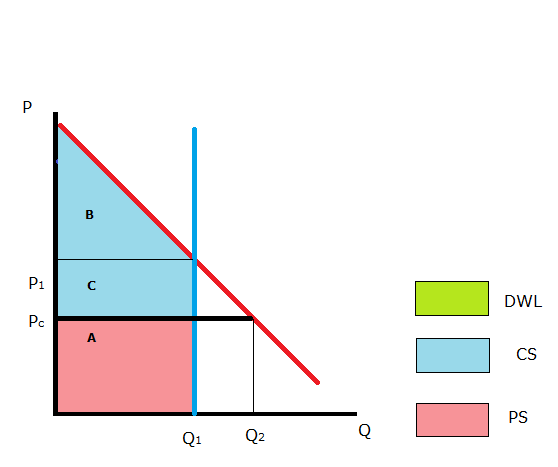 The above diagram shows what happens when the government sets a price ceiling in a market with perfectly inelastic supply.

The thick black line is the price ceiling. When the government puts a price ceiling of Pc, the price of the good decreases to Pc. This increases the demand to Q2 - creating excess demand of Q2 - Q1. However, the supply remains the same and thus the equilibrium level of goods being sold in the market remains at Q1.