Golden balls was a British TV show which was a great case study for game theory.

The final scene is called "split or steal" where two contestants are offered two golden balls, one with "split" written inside it and the other with "steal" written inside it. The players both have two options: they can choose split or steal. The opponent does not know what choice they have made. You can watch an example here:

Essentially, if both player decide to split they share the winnings 50/50. If either player chooses to steal and the other splits, the person who chooses to steal wins all the profit and the other person gets nothing. If they both steal they both receive nothing. This is very similar to the common problem in game theory called the prisoners dilemma. The game theory representation of this is as below: 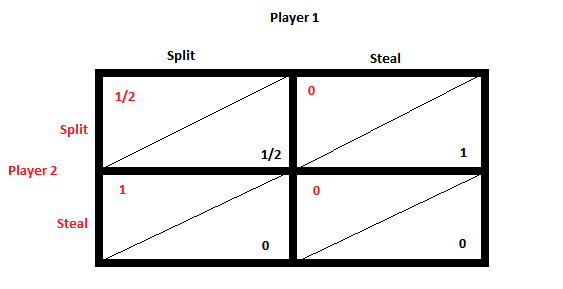 Is there a way that contestants could earn a higher profit?

There is a strategy that contestants could use if they wished to increase their profit. The best strategy would be for both players to let the other person, who has not seen whether the ball has split or steal choose which ball their opponent must choose. In this case, each ball is chosen at random and there are 4 outcomes for each player:

Each outcome is equally as likely so the expected profit that you would earn is just the weighted average. In this case, your profit would be

Therefore, it can be seen that the expected profit can be increased from 0 to 0.375 when contestants get to choose the other persons ball instead of their own.