This also shows us why we use “K” to denote capital, as we reserve “C” for costs. The isocost line can be re-arranged such that:

This tells us that the slope of the isocost line is equal to the wage-rental ratio.

Suppose that we had the example where costs were $10 and the wage and rental rate were $1 each. The isocost equation would be:

If we re-arranged it, it would be:

The “isocost line” is when we graph this cost equation, with capital (K) on the y-axis and labour (L) on the x-axis as follows: 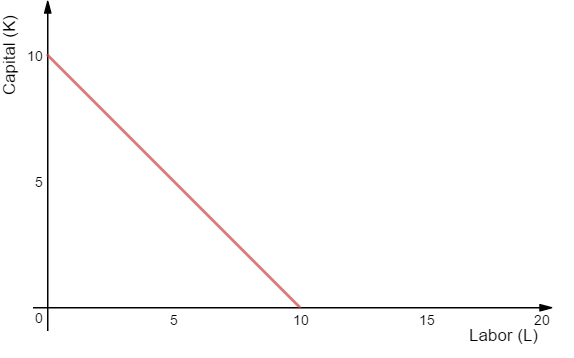 We can see that if there was no labour to be used, the total amount of capital that can be used is 10 units. This can easily be confirmed because

. Conversely, if there was no capital used then there would be 10 units of labour used. Finally, suppose that the firm wished to use capital and labour in equal proportions. In this case, we would substitute in K = L into our cost equation such that:

Thus we would have the firm using 5 units of labour and 5 units of capital.

Effect of a wage increase on isocost line?

Again we can re-write this with K on the y-axis, such that:

We can see now that the wage-rent ratio has increased. This causes the isocost line to become steeper. The graph of the new isocost line is represented by the blue line in the diagram. 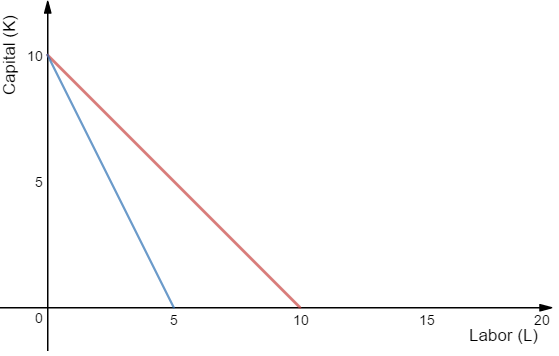 Again, we can see that if the firm only wishes to use capital they will still use 10 units of capital. However, if they now only use labour they will only be able to afford 5 units, as $2 * 5 = $10. Finally, if they wish to use capital and labour in fixed proportions again, such that L = K then we would have:

Thus in total, we would have K = 3.33 and L = 3.33. In these circumstances, even though the price of capital has remained unchanged, the amount of it used would still be reduced because of the increase in the wage rate.