Consider the following two economies: home and foreign. Both are endowed with 100 units of labor and both produce cheese and wine. They have the following unit labor requirements

This tells us that it takes two units of labor to produce one unit of cheese for the foreign country. All of production requires 1 unit of labor.

This means that if foreign decides to use 1 unit of labor to produce cheese, that it will produce 0.5 units of cheese. Therefore, the output produce equals (labor used) ÷ (unit labor requirement).

Suppose that the price of cheese was $2. This would mean that 1 unit of labor produces $2 * 0.5 = $1 of value for the country. Suppose that the price of wine was also $2. In this case the value of producing a unit of wine is $2 * 1 = $2. In this case the foreign country would prefer to produce wine instead of cheese. This idea can be generalized to the following conditions:

We can now use these to derive a relative supply curve 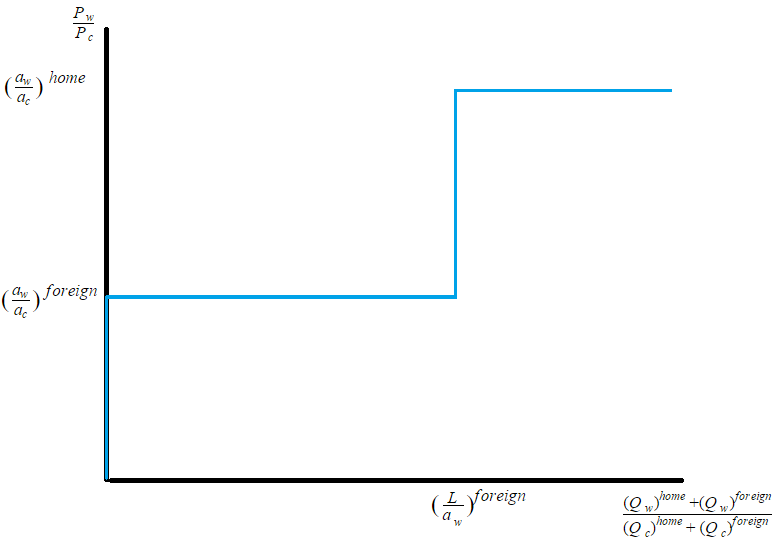 It should be re-iterated that this is a relative supply curve, which measures the relative output of wine compared to cheese.

The first part worth noting is the the blue vertical line sitting on the origin. There is no supply here because both home and foreign can maximize the value of their output by producing cheese.

The country foreign would be the first country to produce wine when condition (2) is satisfied for them. In this case they are indifferent between producing either cheese or wine. The supply curve is now horizontal until we arrive at the point where foreign is using all its labor producing wine and then it becomes vertical again.

Finally, it becomes horizontal again when condition (2) is satisfied for home. At this point they are indifferent between producing wine and cheese.

You cannot have the price go above this point because that would make the quantity of cheese become zero and cause the relative supply curve to tend off to infinite.