The natural level of output, depicted as the Long Run Aggregate Supply (LRAS) curve is the level of output that an economy will produce in the long run.

The natural level of output is sometimes also referred to potential output because it's the "potential" level of output that an economy can produce if all factors are used efficiently.

In a AS-AD diagram, the natural level of output is the vertical blue line. 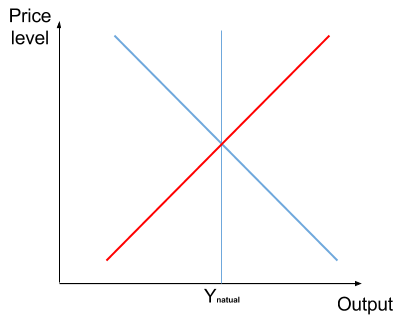 In this type of setup, it is implicitly assumed that there is no economic growth. If there was economic growth, it would cause the horizontal long run supply curve (natural level of output) to shift to the right.

What determines the natural level of output?

The natural level of output is the level of output that would occur if there were no imperfections in the market. Therefore the factors which determine it are as follows:

Productivity can be thought of as the process which we use to produce output. If productivity increases, this means that we are able to produce more output using the same amount of inputs. It would be like going from being able to produce 1 cake with 1 oven and 1 person to being able to bake 2 cakes with 1 oven and 1 person. The amount of labor and capital (the oven in this case) hasn't changed, but our output has increased. This clearly does not depend on the price level within the economy.

How many hours that a person desires to work will also be determined by the real wage. For example, If the hourly wage was $100 in nominal terms but inflation was 10,000% (essentially your income would be worth nothing by the time you were paid). And since real wages account for prices, how many hours people work won't be affected by prices either.

In summary, since all factors which determine natural level of output are based on real variables, the long run aggregate supply curve is vertical because it has no relationship with the price level.

Return to natural level of output

In the long run the economy always returns to long-run equilibrium.

Let's suppose that in the short run, we experience an aggregate demand shock. 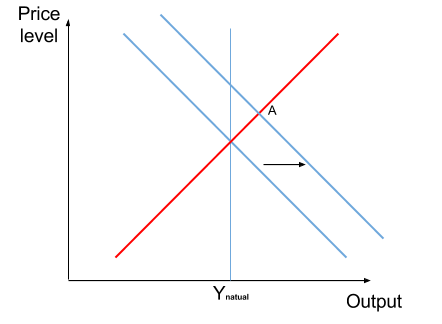 This causes the aggregate demand (AD) curve to shift to the right, out to the new equilibrium A. The result is that price level increases and output increases above its equilibrium. To get this extra increase in output, it requires that our workers increase the hours that they are working. It also means that the level of unemployment has decreased. Since unemployment has decreased, this has made labor relatively more scarce. In essence, the supply of potential labor has decreased. This means that the price of labor (wages) will go up. However, in the short-run wages are sticky - that is, fixed. Thus, since there is no adjustment in wages, we get a temporary boost in the economy. However, over time, people will start negotiating new wages and give that unemployment has decreased they will have more bargaining power. This will lead to wages increasing. Thus in the long run the supply curve shifts inwards.

This results in the new equilibrium being where all three curves intersect higher than the original equilibrium. In the long run, the positive demand shock has lead to no change in output but a higher price level! This leads to the following rule: